Duane and his Magical Slide 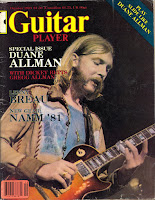 One of my guitar and musical influences was the great Duane Allman. When I was first learning to play, I started paying attention to Duane and his music. He had already died, but the music he left us with captivated me. Duane's melodic slide guitar playing was mesmerizing, and I wanted to learn to play like him.
There were other slide players around whose music I was familiar with: Bonnie Raitt, Mick Taylor, George Harrison, and a few others. I had not paid much attention to slide before I heard Duane and the Allman Brothers Band. Obviously, there were quite a few excellent slide artists, but Duane's playing stood out for me as superior.
I went to a pharmacy to buy a bottle of Coricidin – not because I had a cold, but because I read in Guitar Player Magazine that was what he used for slide guitar. I was disappointed to discover that it now came in a plastic bottle. Plastic doesn't work for slide guitar.

"It doesn't come in glass bottles anymore?" I said to the pharmacist.
"No, sorry. Are you a guitar player?" he said.
"Yes. How did you guess?"
"Duane Allman, right?"
"Yes."
"We get that a lot. It seems he inspired a generation of guitarists to buy Coricidin – just for the glass bottle, so they could learn to play slide guitar."
I ended up buying a glass slide in a Boston guitar store and set out to play like Duane. It didn't take me long to realize that the magic of Duane Allman and his spectacular ability on guitar was pretty much out of my reach. He made it sound so effortless, so fluent, so easy. Those sweet, soaring slide lines were not anywhere close to being easy to recreate. It was further proof that Duane was a man with the rarest of rare talents.
Music fans know that Duane joined his brother Gregg and formed the Allman Brothers Band – a Southern rock group that gave us many memorable songs. Along with Gregg's soulful voice, Dickey Betts, and other members, the Brothers were well on their way to becoming one of the biggest bands on the planet when Duane tragically died in 1971 at age 24. The band continued, with Dickey doing his best to pick up the slack. Dickey learned to play slide so he could play Duane's parts, and he did an admirable job.
All these years later, when I hear Allman Brothers songs, and especially, the sound of Duane's playing, it always makes me stop, listen, and smile at the wizardry. I still play slide on occasion, knowing full well that it doesn't come close to the master. It doesn't matter though – Duane inspired me to want to play slide guitar, and it's okay that I can't come close to his ability.
Many guitarists have done excellent slide work. For me though, Duane was clearly the best, and a huge inspiration for me and many others.
I'm writing this on October 29, 2019 – 48 years to the day Duane died in a motorcycle accident.
Larry Manch is an author, teacher, guitar player, freelance writer, and columnist. His books include: 'Twisted Logic: 50 Edgy Flash Fiction Stories', 'The Toughest Hundred Dollars & Other Rock & Roll Stories', 'A Sports Junkie', 'The Avery Appointment', 'Between the Fuzzy Parts', 'Beyond the Fuzzy Parts,' 'Jonathan Stephens Is Just A Kid', 'Jonathan Stephens Is Moving', 'Suspended Logic', 'Descended From Royalty,' and 'Covering the Astros.' His books are available in paperback (some in e-book.)
He writes about sports for Season Tickets, food and travel on Miles & Meals, and music/guitars on The Backbeat.
Follow @Season Tickets
Posted by Larry at 2:35 PM