Gentle On Our Minds 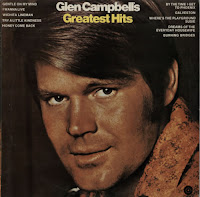 Glen Campbell died in August 2017 at age 81, bringing to a close a decades long musical career filled with incredible songs. He was best known as a Grammy winning singer, television host, and occasional actor. What many don't know is that before the movies and television shows, and before the hit songs, he was one of the most sought after session guitarists in the business.

Most fans know him for songs like 'Galveston,' 'Gentle On My Mind,' and 'Rhinestone Cowboy,' but before he recorded those memorable songs, he was hard at work making records for other artists. Before fame as a solo artist, Campbell was a member of what is now known as The Wrecking Crew, a group of first call, Los Angeles studio musicians. With players such as James Burton, Hal Blaine, Carol Kaye, Leon Russell, and others, Campbell's guitar work can be heard on hundreds of 1960's recordings. Who would have guessed that when listening to some Frank Sinatra, Wayne Newton, or Monkees songs, you were hearing Campbell's guitar?

His musical career began early, at age four, in his home state of Arkansas, with a guitar given to him by an uncle. He progressed quickly, performing on the radio at age six, and by his 17th birthday, he was playing in his uncle's band in New Mexico. By 1960, with guitar skills that set him apart from most others, he found his way to Los Angeles, and worked at a music publishing company, writing and recording demos. It wasn't long before record producers began calling him for session work.

As a studio guitarist (he also played banjo, bass and mandolin), Campbell appeared on hundreds of recordings for other artists, including Frank Sinatra, the Righteous Brothers, Merle Haggard, Dean Martin, Nat King Cole, Ricky Nelson, The Monkees, the Beach Boys, and many more. When Brian Wilson stopped touring with the Beach Boys, Campbell was recruited to replace him in the live band, playing bass and singing falsetto harmony vocals.

Although Campbell still had a recording contract as a solo artist with Crest Records, and then Capitol, he did not enjoy chart success with his own music. That changed in 1967, with the release of the John Hartford penned, 'Gentle On My Mind' (fellow Wrecking Crew guitarist James Burton also played on the sessions.) The song won four Grammy Awards, and opened the door for Campbell as a solo artist. Later that year he had another hit with Jimmy Webb's 'By the Time I Get To Phoenix', followed by two more Webb masterpieces, 'Wichita Lineman' (1968), and 'Galveston' in 1969.

Campbell became a television star in 1968 when he was tabbed as a summer fill-in for The Smothers Brothers Comedy Hour. The brief stint on TV was successful, showcasing his voice, guitar playing, and his compelling, down-home country boy personality. The next year he had his own show, The Glen Campbell Goodtime Hour, with emphasis on great music and fun. The show ran for three seasons, and often featured well known performers that Campbell knew from his session days, such as Johnny Cash, Neil Diamond, Linda Ronstadt, and Willie Nelson.

His personal life was well documented, especially when drug and alcohol dependency affected his behavior beginning in the 1970's, and what the tabloids often described as a stormy relationship with country singer Tanya Tucker in the '80's. Campbell was diagnosed with Alzheimer's Disease in 2011, and fourth wife Kim was outspoken in her descriptions of the difficulty of being a caregiver for a loved-one afflicted with that devastating disease.

For music fans, Campbell was, first and foremost, a captivating singer and performer, and his spectacular vocal and guitar skills distinguished him as an extraordinary talent. Though he didn't write any of the songs he made famous, he made them his own with an unmistakable delivery. Those songs were perfect for him, and they were perfect for the time. I still have Campbell's best known songs on my music player; because they are such exceptional pieces of music, especially 'Galveston' and 'Gentle On My Mind.' Some fifty years on after hearing them for the first time, Campbell's versions of those songs still resonate strongly with me.

I also appreciate the unique and special abilities of songwriters like Hartford and Webb, who wrote the words that Campbell sang so beautifully. Without those gifted artists, we might not even know the man who went on to make their songs famous. With that said, it was the artist Glen Campbell who brought those songs to life. The music lives on, still gentle on our minds.


This video is an interesting insider's look at some of the musicians of the Wrecking Crew.

Songs on which Campbell appeared as a session player.

Yes, this one is hard to believe, but Glen really did play guitar on this hit song.

Larry Manch is an author, teacher, guitar player, freelance writer, and columnist. His books include: 'Twisted Logic: 50 Edgy Flash Fiction Stories', 'The Toughest Hundred Dollars & Other Rock & Roll Stories', 'A Sports Junkie', 'The Avery Appointment', 'Between the Fuzzy Parts'. His books are available in paperback and e-book.

He also writes about sports for Season Tickets, food and travel on Miles & Meals, and music/guitars on The Backbeat.