I was a passenger in a car on Interstate 35 just entering Austin, Texas, when I read the news on my phone. It was Tuesday, May 17, and Texas singer, songwriter, and luthier Guy Clark had died earlier that day. After reading the news, I looked up and the first thing I saw was an American flag at half-staff.


I was reasonably certain that no one whose death usually prompts lowered flags had recently died. I looked around and in the next two minutes, spotted five other American flags. Of the six I saw in that span, three were at half-staff. My thought was, whether it is for Clark or not, it is fitting that at least three American flags in Texas fly low today in honor of Texas legend Guy Clark's passing.
Clark, born in 1941 in the west Texas town of Monohans, is probably best known for songs like 'L.A. Freeway', 'Desperados Waiting For A Train', and 'I Don't Love You Much Do I'. He recorded twenty albums, winning a Grammy Award in 2014 for 'My Favorite Picture Of You.' His songs have been recorded by Johnny Cash, Rodney Crowell, Jerry Jeff Walker, Jimmy Buffet, Vince Gill, Kenny Chesney, Roger Creager, Alan Jackson, John Denver, and many other well-known artists.
Ricky Skaggs had a #1 hit with 'Heartbroke', Walker and Creager had success with 'L.A. Freeway', Cash and the Highwaymen with 'Desperados…'. John Conlee had a Top Ten country hit with 'The Carpenter' – all written by Clark.
The New York Times called him a "king of the Texas troubadours," and described his lyrics as "…narrative-rich songwriting."
Peter Cooper, in a story for the Tennessean, published the day Clark died, wrote that Clark "…garnered a reputation for uncommon poetic perception."
"I think he may be the greatest storyteller of all, for me," said Vince Gill in Cooper's story. "He paints the coolest pictures of all." Gill had a top 10 country hit with Clark's 'Oklahoma Borderline'.
"It's almost like his music was embedded in the land," said fellow Texan Sarah Jarosz, in a Chicago Tribune story.
I didn't discover Guy Clark and his exceptional music until the summer of 2013 when I read Texas Music by Rick Koster. From that book, I also discovered a slew of exceptional Texas singer/songwriters, including Rodney Crowell, Joe Ely, Townes Van Zandt, and Steve Earle – as it turns out, every one of them protégés and/or close friends of Guy Clark.
In the 1970's, Clark and his second wife Susanna (mentioned in 'L.A. Freeway', and who died in 2012) hosted legions of young songwriters and pickers like Crowell and Earle in their Nashville home. In these often marathon sessions, friendships were forged, songs were crafted, and legends made. Guy and Susanna Clark were facilitators of a massive movement of creativity; encouraging, fostering, and mentoring young songwriters who went on to varying degrees of success.
Robert K. Oermann wrote liner notes for Clark's 'Craftsman' album, noting that Clark was "The patron saint of an entire generation of bohemian pickers."

My friend @GuyClarkKCA passed from the world this morning. Rodney pic.twitter.com/bmeSTQsbIq
— Rodney Crowell (@RodneyJCrowell) May 17, 2016

While reading Koster's book, I explored the wealth of outstanding material recorded by Clark, a man with insights somehow different from others – that "uncommon poetic perception", that Cooper wrote about in the Tennessean. It was things like the entirely believable sentiment of hoping to avoid disaster on a big city highway while escaping the bustle, that first grabbed me. Clark's 'L.A. Freeway' struck me as an exceptionally well-told story of trying the city life and discovering it's not for you, being homesick for Texas, and disliking a landlord ("That son of a bitch has always bored me.") Many might consider a box of moldy cookies insignificant, but Clark wove it into a song line, an additional piece that helps to make the 'L.A.' story compelling, personal, and unique.
Next, it was the moving love story 'I Don't Love You Much, Do I', often sung in spectacular harmony with the incredible Emmylou Harris. This song so affected me the first time I heard it, that I made it the ringtone on my phone for my wife Tiffany. Such is the power of Guy Clark and his masterful way with words.
As mentioned, musicians and fans alike have been equally enthralled by Clark's music. What greater affirmation for a songwriter than to have artists of the caliber of Cash, Denver, Walker, and so many others record your songs. Vince Gill recorded Clark's 'Oklahoma Borderline', and he was moved to tears when he heard 'Randall Knife' the first time.
“I started weeping, bawling all over my guitar,” Gill told Country Weekly magazine in 2011, as reported in the Cooper/Tennessean story.
Guy Clark's words are indeed poetry, not just words set to music. He told Sandmel, according to Cooper, that his old friend Townes Van Zandt "…never rhymes moon-June-spoon to make a buck. It’s more of a literary approach," perhaps not realizing he was also speaking of his own writing style.
John Spong, writing in Texas Monthly about Clark's lyrics: "Guy’s were stark and grounded, like he’d found them in the back of a roughneck's pickup in the Monahan's oil field. But all of it was poetry."
Throughout Clark's long career, he was, as CNN's Don Melvin and Brandon Griggs wrote, "…one of the most respected singer-songwriters of his generation," and "revered by the Nashville music community for his song craft and generosity of spirit."
On the day Clark died, Rodney Crowell, his friend for 45 some years, changed his Facebook and Twitter profile pictures to one of him kissing Clark on the cheek. "My friend Guy Clark passed from the world this morning," wrote Crowell. 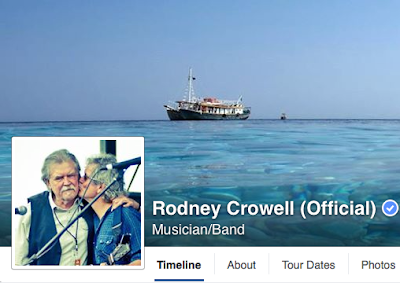 Lyle Lovett, fellow Texas musician, wrote on the same day on Twitter and Facebook: "Guy Clark was my friend. The world is a better place because he lived. I pray for comfort for all who loved him."
Roseanne Cash, daughter of Johnny Cash, former wife of Rodney Crowell, and another recipient of Clark's mentoring of young songwriters, wrote on Twitter:
"Travel safe, old friend. I would not be the songwriter I am if I hadn't sat at your table and learned from a master."
As mentioned by Vince Gill, in Clark's songs, "He paints the coolest pictures of all," leaving no doubt that Guy Clark was a master musical artist.
Peter Cooper, in his Tennessean story, quoting Clark as told to Sandmel:
"... I'll bet that when you're dying, you're not going to think about the money you made. You're going to think about your art."
"In the end, then," wrote Cooper, "Mr. Clark had something fine and gleaming on which to dwell."
"I wished I was in Austin," sang Clark in 'Dublin Blues'. I was in Austin the day he died, on a rainy Texas day watching lowered flags flying, paying tribute to a legendary artist.
Although he is now gone, fortunate are we who can still dwell on the "fine and gleaming" art of the late Guy Clark, Texas troubadour.


Larry Manch is an author, teacher, guitar player, freelance writer, and columnist. His books include: 'The Toughest Hundred Dollars & Other Rock & Roll Stories', 'A Sports Junkie', 'The Avery Appointment', 'Between the Fuzzy Parts'.

He also writes about baseball for Climbing Tal's Hill, food and travel on Miles & Meals, and music/guitars on The Backbeat.

He lives in Central Texas with his wife and family.