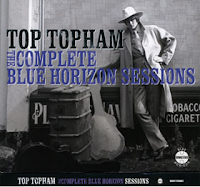 He was the first lead guitar player in one of the great guitar bands of all time. As a founding member, he helped to shape the early direction of the band, as they quickly became one of the premier acts in the busy London blues scene of 1963. By 1964 though, he had left the band, to be replaced in succession by three of the most popular lead guitarists in rock history.

His name is Anthony 'Top' Topham (also known as 'Sanderson') and his band was the Yardbirds, which included original members, singer Keith Relf, guitarist Chris Dreja, bassist Paul Samwell-Smith, and drummer Jim McCarty. Their vision was to play blues – not so different than what a lot of other British bands were doing at the time, but the young Yardbirds, with Top on lead guitar were better than most of the competition.

Within a few months, the Yardbirds were rising stars, first as the backing band for singer/harmonica player Cyril Davies, and then on their own. They were playing classic Chicago style blues, covering artists like Muddy Waters, Howlin' Wolf and Bo Diddley, as well as Elmore James.

I asked Top via an e-mail interview about the original vision of the Yardbirds band members. What was the agenda - get rich; get girls; be faithful to the blues; make hit records?

"These considerations were on a different planet at that time and age," he told me. "We were passionate about playing blues music and wanted to get better; it all took off so quickly."

Take off they did, as the Yardbirds quickly gained a reputation as a quality act amid dozens of other bands vying for stage time and recognition. It was an exciting time for serious, aspiring musicians - the chance to take what they had learned from the old masters and interpret it in a way modern audiences would appreciate. I asked Top how it felt to be on the 'frontlines' of the British blues scene.

"We never thought of it as a frontier," he said. "We just loved playing blues."

Top's guitar influences were similar to those of many of his contemporaries.

Like young musicians everywhere, money was tight and equipment was hard to come by. Not many British guitarists owned Gibson or Fender guitars in 1963. Hank Marvin of the Shadows had a Fender Stratocaster, one of the few British musicians of the time to own such a guitar. Top's guitars included:

Two months after the Yardbirds formed, Giorgio Gomelsky, owner of the well-known Crawdaddy Club (and later the band's manager and first record producer) invited them to take over as the house band. The Rolling Stones had held the position, but they were moving on to bigger things, leaving a golden opportunity for the Yardbirds. To realize that it was the Yardbirds that were chosen to replace the Stones at the Crawdaddy when the Stones moved on speaks volumes about the talent level in the band.

Unfortunately for Topham, this move led to his departure from the group. He was only 15 years old at the time, and although he was earning good money ("double what my father was earning,") his parents were none too happy at the thought of Top leaving school to play blues in a club far into the night.

Top said: "I was only 15 then, three or four years younger than the rest, and there was no way my parents would let me go out five or six nights a week to play music."

The decision was made that Top would quit the band and return to his studies. It was not a popular decision with Top.

"It was not happy - it was extremely stressful."

Topham left the band and returned to art school – giving up the coveted Yardbirds lead guitar role to the 'older' Eric Clapton (all of 17).

"Eric Clapton was the obvious person to replace me," Top told me.

And so the man who was there at the beginning - the man who helped to build the band, shape the shared vision, and make the Yardbirds into a force in the British blues scene, stepped down. Topham was quoted as saying that after awhile, he hadn't regretted the move as the band was moving away from the blues and into mainstream pop – not a direction that Top would have been happy with (and as it turned out less than two years later, for Clapton too. He quit in protest reportedly because he felt the Yardbirds were abandoning their roots – the blues).

Topham went on to Art College, which led to a career in interior design and painting, as well as continuing to play his music. Top played in several bands and worked as a studio musician through the years but unfortunately, never really received the credit he is due as the first lead guitarist in the Yardbirds – a very good guitarist overshadowed by men who became legends of rock guitar.

I wondered if Top felt that had he not quit the Yardbirds, he might have influenced the others to stay true to the blues and steer away from the commercial material they recorded with three other lead guitarists.

"Possibly, it would have been different," Top said. "I never really liked what they did later, except for 'Still I’m Sad' - a great tune. However I have always been a great admirer of Jeff [Beck]."

In 1992, the Yardbirds were inducted into the Rock and Roll Hall of Fame. As Jimmy Page stepped to the microphone, he announced to the crowd that one member couldn't be there to accept his award – the late Keith Relf, lead singer, who had died in 1976. The problem is that Jimmy forgot someone – a man who had been instrumental (in more ways than one) in making the Yardbirds into a band that would eventually be inducted into the Hall: Anthony 'Top' Topham.

The Yardbirds with Topham on lead guitar were obviously good enough to become the house band at the Crawdaddy Club in 1963 – a major step in the development of the band. I asked Top if he felt slighted that he is not as well known as the three later Yardbirds lead guitarists, and has not received credit for helping to propel the Yardbirds to a prominent position in the London Blues scene before Clapton, Beck, and Page.

"Perhaps; there is still a lot that has never been said and it may well one day..."

What if he had not quite the band – could he have influenced the others to continue to play blues rather than veering off in the direction they took?

"No I probably would have been outrageously outrageous," he told me. "I was a very creative person."

Larry Manch is an author, teacher, guitar player, freelance writer, and columnist. His books include: 'Twisted Logic: 50 Edgy Flash Fiction Stories', 'The Toughest Hundred Dollars & Other Rock & Roll Stories','A Sports Junkie', 'The Avery Appointment', 'Between the Fuzzy Parts'. His books are available in paperback and e-book.
He writes about sports for Season Tickets, food and travel on Miles & Meals, and music/guitars on The Backbeat.
Follow @LTM_Author
Posted by Larry at 6:36 AM

Jonathan Stephens Is Hanging In There!